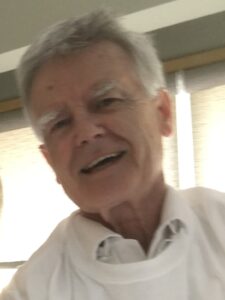 I spent most of my career teaching Economics in the Business faculty at Red River College. That’s where I joined with several colleagues to write an Economics Workbook, my first foray into the world of publishing. Through Prentice-Hall, our book was successfully distributed to colleges across Canada. I loved the writing and figured there were possibilities on the horizon for other stories.

My hobby and experience as a professional musician led to the first possibility. I had tape-recorded (yes, it was that long ago) several hours of conversations with old-time fiddler Andy Dejarlis in the 1970s. The tapes sat idling long after Andy’s passing until it dawned on me that here was a chance to put the story on paper. It resulted in my first biography – Andy DeJarlis, the life and music of an old-time fiddler – published by Great Plains Publications in 2010. I followed that with a story on local runner Chris McCubbins: Pan-Am Games gold medalist in the Steeplechase; Olympic competitor in the 10,000 metres; member of the elite US Army Pentathlon Team; University of Manitoba track coach; teacher; and former brother-in-law. The book – Chris McCubbins, Running the Distance – was published by J Gordon Shillingford Publishing in 2013. 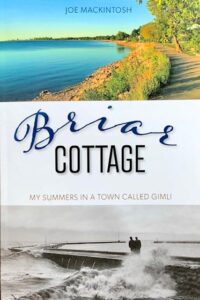 My third book – Briar Cottage, My summers in a Town called Gimli – is due on the shelves in May 2022. It’s my story as a youngster spending summers at our cottage in Gimli, Manitoba published through Friesen Press.

The story is a memoir. It’s a slice of history—the story of Gimli, Manitoba—come to life.

There’s the mystique of rail travel; there’s rafting on the pond; there’s swimming at the harbour. There’s dancing to the Men of Note. There are bonfires and bull rushes and bicycling the town; the tastes of Central Bakery; the fun of pinball at Sam’s Café; and the vibes of the Falcon. This book is about adventures that define summer life in Gimli for a city lad. In addition, there’s the story of family and their struggles in the 1930s against a backdrop of happier times at the cottage.

It’s a story that will bring back memories of life in Gimli especially for those who have summered in the town or along the west-shore beaches of Lake Winnipeg.