Our first Kids Book Chat did not have as many young attendees as we’d hoped, but it was fascinating to see the interaction between Bill Richardson and his illustrator, Slavka Kolesar. It was the first time that they’d had the chance to ‘meet’, even if it was only virtually.

Bill read their book, The Promise Basket, a touching story about a Mother’s love for her child and how she expressed that love, even though she had very little to give. 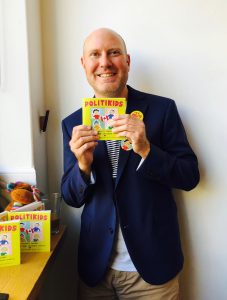 Our second Kids Book Chat will take place on September 1 at 1 pm, when we will feature Kaj Hasselriis. He will read from his book, Politikids, which he also illustrated. This virtual event is free to Guild members and their families.

To attend, please email the Guild office at manitobawritersguild3@ gmail.com to receive instructions.

He is a cartoonist who lives in Winnipeg. His first name rhymes with “Hi!” Kaj took up illustrating in 2018 after many years as an award-winning CBC journalist. That fall, he wrote, drew and self-published his first children’s book, Politikids: Canada’s Leaders Tell Their True Childhood Stories. He sold almost 1000 copies of Politikids during the federal election. Now, Kaj is working on his second book, The Golden Boy in the Case of the Missing Cube, in collaboration with the Winnipeg Architecture Foundation. 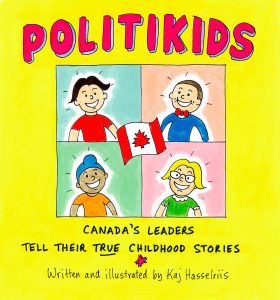