Our August Book Chat will feature Guild member Nancy Chislett. She recently launched her debut novel Bombing the moon.
To hear her read from her novel and answer questions, such as what it was like to launch her first novel, email MWGEvents2022@gmail.com for the Zoom instructions.
About Nancy:
Nancy is an avid traveler, having visited almost 50 countries on six continents. She also plays classical music on piano and composes a little jazz. Career-wise, she has worked as a high school teacher and as a university administrator of an international student program. Bombing the moon is her debut novel. She recently received a grant from the Canada Council of the Arts to support her while writing her second literary work, entitled, Saving Fictions. She lives in the eclectic city of Winnipeg with her spouse, Grant, and dog, Simon. 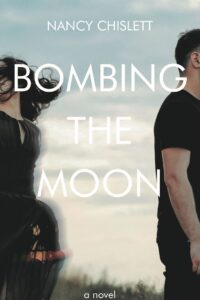 About Bombing the moon:
At 24, Devin Rush’s future is unknown and his parents don’t support his dreams of becoming a songwriter. Add to that North Korea’s nuclear threats, a corporate world of greed, and impending automation, Devin feels like the world is rigged against him.
Conflict boils at home. Devin is jobless and antagonistic. His parents, wondering if he’ll ever man-up, fear he’ll depend on them for life. But when Devin’s grandfather gives him a one-way ticket to Nairobi, Devin sees no alternative and leaves, and is thrust into a world unlike any he’s ever seen.
Stunned by his sudden departure, Devin’s parents and sister are pushed further afield of the control they crave. Resentment and guilt nudge his parent’s marriage closer to collapse, and abandonment triggers his sister’s long-buried shame. When Nairobi’s election approaches and tensions erupt, Devin is faced with choices and consequences that are all too real. Beautifully written, often subversive and darkly funny, ‘Bombing the moon’ is an honest, intimate exploration of the promises and limitations of tough love.